A first for me. A happy first. 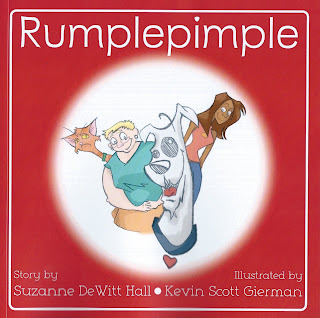 Over the past spring and summer, Charlie made friends with a tribe of neighborhood youngsters.

I gave the eldest girl a copy of Rumplepimple a month or so ago when she and a friend came by on their bikes and stopped in the yard to say hello and receive his enthusiastic kisses. When I saw her a few weeks later and asked if she liked it, she beamed and nodded, and the friend accompanying her announced "She read it SEVEN times!"

Yesterday Charlie and I went for a walk. Three neighborhood kids ran toward us as they often do when we near their corner. The crew included two second graders and the fourth grader who'd received the book. When the trio arrived at where we stood waiting, bending down to greet the jiggling and jumping Rumplepimple, the younger girl piped up "I want a copy of Rumplepimple!". Not to be left out, the young lad cried "Me too!"

Charlie went through his usual wiggle, wag, jump, and kiss routine. The kids described the movie they were planning to make, featuring Halloween costumes and zombies. They detailed their plans while petting Charlie, and asking me questions.

"Did he really pee on that kid's shoe?"

"Did he really take that blanket?"

As we talked about the book, the fourth grader said "Oh, yeah, and my teacher loved it!" She continued on to say that he'd read it to the class.

That was a first for me. To have a child be so excited about a book I wrote that she wanted to take it to school was exciting enough. But to have a teacher read it to a group of kids?

It was a very happy first

Posted by Diane Marie Hall at 9:39 AM